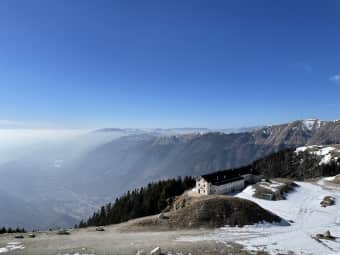 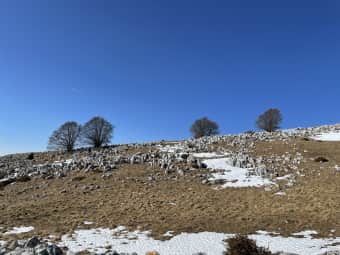 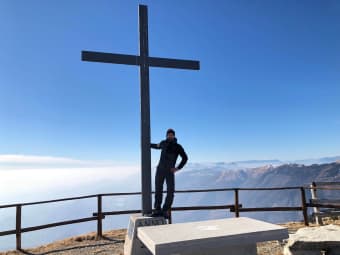 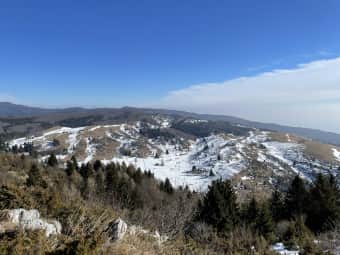 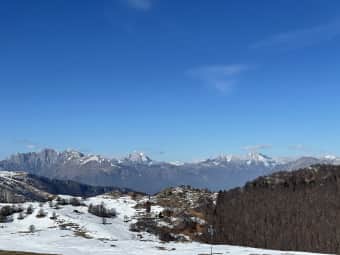 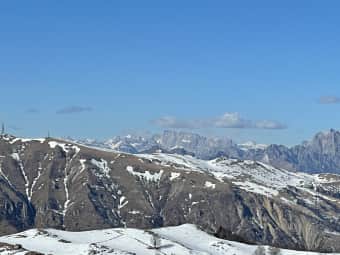 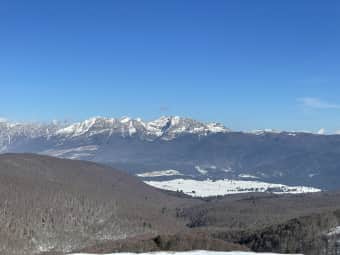 New excursion to one of the most popular places in recent years: Mount Pizzoc. Given the myriad of variations that this magnificent place offers, today I decided to take several routes in the woods on the south side. Together with me, in this adventure, there is the Auronzano Angelo, a great connoisseur of Cadore and a mountain lover like myself.
The departure is in "Le Briglie", a hamlet of Sonego in Fregona, near Vittorio Veneto . The town is famous for the beautiful Caglieron Caves. For more details: excursion by MyBestTimeHiking to the Caglieron Caves . The parking is very large , the road to reach it is quite narrow and with dirt spots that are not always clean. Buckle up your boots and put on your wool cap for the bitter cold: let's go!
The road forks immediately: on the left you skirt the Rio Dolza and arrive at the former stone quarry above the Piadera di Vittorio Veneto . We, on the other hand, choose the road on the right and, after a few meters, we take an uphill path with a clear indication: "Direttissima". Throughout the journey you will come across this sign several times indicating the fastest way and, in fact, straight towards the top of Pizzoc. The route chosen is the CAI 981a path which immediately climbs up on a rocky bottom and leads to about 200 meters in altitude. We keep the track of the CAI and thus we leave the "Direttissima" to head towards E where a very sweet stretch at high altitude in the middle of a beech forest makes us catch our breath. The landscape at this point of the route is summed up in dense vegetation, rendered bare by the season. This part of the route is called the "Sentiero Terra Nera", which in fact corresponds to the CAI 981a present on the Tabacco maps. A couple of slightly challenging vertical pitches in the woods and you will soon reach an altitude of 1000 meters. We always continue at high altitude until we reach Campo Cadolten.
A little refreshing break is a must; the sun has become scorching, one feels that spring is already upon us. We take the road that now corresponds to the asphalted road (private) that leads to Cadolten da Sonego. At 100 meters before the church of S. Floriano, clearly visible at the end of the road, the variant of the Bracconiere begins on the left. CAI 981 path that runs along the entire southern ridge of the Pizzoc at an altitude ranging between 1100 meters and 1300 meters. The track is wild, albeit well marked, a rustic path that is suitable for a poacher. At the top of the hill called Monte Croce, a new variant starts (marked with black dashed lines on the Tabacco map) called "Sentiero WB Berry" dedicated to William Bernard Berry, an American lieutenant from Virginia, who during the Second World War found himself in fight together with the partisans of the Cansiglio.

This part of the route is the most characteristic and unusual of the whole excursion: you quickly access a lunar landscape of grass, stones and some isolated trees that form unpublished postcards. Furthermore, in the middle of this constant ascent there is a very beautiful view over the whole Cadolten and in the background the summit of Col Nudo. A small depression allows you to catch your breath and prepare for the last climb of the day through the Casere Croce on Pian de Gesia. From the ruins of the casere it is possible to glimpse the guard rail of the paved road that from Cansiglio allows you to reach the summit. There is still a good amount of snow that covers the entire road, leaving a small passage where it is possible to advance in peace without worrying about the ice.
We aim for the Pizzoc summit cross at an altitude of 1565 meters straight in front of us! From here we have a mediocre view of Vittorio Veneto and Revine Lago due to the presence of an annoying haze. On the other hand, however, towards the Dolomites the view is exceptional: Pelmo, Antelao, Civetta, up to the south face of the Marmolada! The crown of mountains ends with the Prealps of the Alpago with Dolada, Monte Guslon, Cima delle Vacche up to Cimon del Cavallo (Monte Cavallo). After all, still covered with snow, Pian Cansiglio in all its beauty. We go down a few meters and reach the Città di Vittorio Veneto refuge which dominates the city of the same name.
For the return we choose the "Direttissima", where we have to overcome several trees crashed by Vaia. At an altitude of approximately 1420 meters we find a deviation: straight ahead we continue towards the "Direttissima", on the right instead begins a less traveled, more wild variant. We choose the latter and it is actually very beautiful and satisfying. There are just a couple of precautions to keep in mind for the reader who intends to repeat it. In winter, pay close attention to ice or glass under the fallen leaves on the path. It is not always possible to perceive until you are on the boot ... at that point most of the time it is too late to avoid a fall. The second noteworthy point is located at an altitude of about 1331 meters and is the passage of a torrent, usually dry, which creates a jump of rock at the point where the path crosses it. Here the track becomes very narrow. In winter, pay close attention to the presence of ice, help by clinging to the available rock face. In summer, however, the stretch is not a walk and should not be underestimated. The variant continues to descend, except for a very short stretch, and rejoins the path of the poacher at the height of a ruined hut called "La tana del lupo".
The Bracconiere path continues at high altitude, on a very narrow and grassy track, runs along the ridge and allows you to have a splendid view of the Costa di Serravalle in the direction of the Sanctuary of Santa Augusta. We thus reach Casera Taffarel from which we have a magnificent view of the Visentin which towers majestically. From here the path becomes number 980, we walk along the beautiful crest of Agnelezza until we reach the cave of the Madonna dell'Agnelezza. We do not continue on the CAI path, which indicates Santa Augusta as the destination, but we take a variant marked with the sign "Le Briglie". The last part in the woods is easy and the descent is done without difficulty. We arrive at the crossroads with the church of Sant'Antonio and soon again at the parking lot that closes the ring.
A beautiful adventure on a mountain seen and reviewed but, thanks to the company and the variants chosen, it has proved to be a place yet to be discovered and which always reserves pleasant surprises!