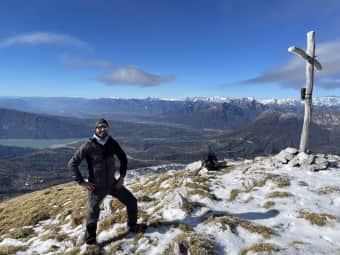 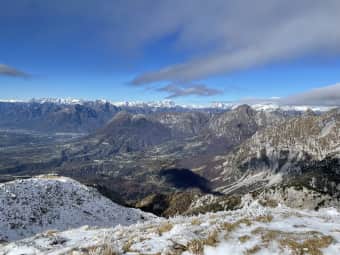 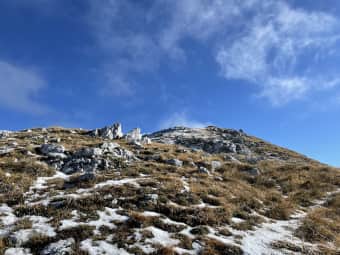 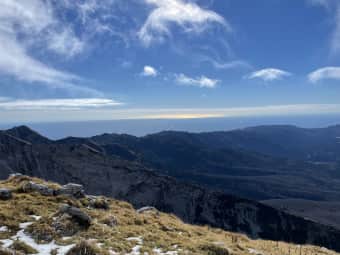 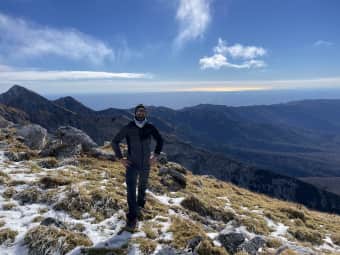 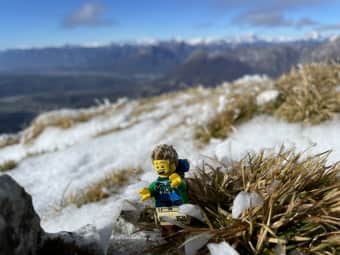 New adventure, this time alone, in the beautiful Alpago area. The cold season is advancing, fortunately it has not yet snowed abundantly in the Venetian Pre-Alps. So I decide to reach an altitude of over 2000m of an unclimbed summit for me: the summit of Mount Guslon.
At 9 am I reach the parking lot of Malga Pian Grant (now also called Agriturismo Monte Cavallo), the morning is clear, cold and with a sun that hardly begins to heat up. From the parking lot it is already possible to see the tip of today's goal: no snow can be seen, at least it does not seem abundant, so I leave the crampons that I had previously brought with me in the car. The parking lot is already full of other hikers who will opt to reach the more famous Semenza refuge. Here you can find the complete report on how to reach it: Rifugio Semenza. Or, here is the report to get there from an unusual side from the surprising Monte Cornor
Backpack on your shoulder and off you go! The cold is felt immediately: in the shaded areas it is barely possible to reach zero degrees ... The first part of the path is paved and is a portion of the Alta Via delle Dolomiti n ° 7 that reaches Pieve di Cadore from Sesto. After Malga Pian delle Lastre, the path becomes gravel and joins the famous “Sentiero Alpago Natura”. Here you enter the woods keeping to the right, you will notice several signs for Monte Guslon and Cima delle Vacche. The road climbs with a gentle slope, I pass the first deviation to the right which indicates the way to the Cima delle Vacche. I arrive at a sharp left bend where there is the detour to the Guslon. An obvious sign indicates the right direction on the right.
Here you have to be very careful not to lose track! Always keep to the left, you have to pass a small crashed pine and, shortly after, you will find a sign on a trunk with the words “Guslon”. This detail is essential if you do not want to miss the path and go up a dry impluvium that leads to the Cadin Valley. Unfortunately, taken by the urge to warm up from the cold, I walked with my head down and found myself in this gorge and, at an altitude of 1500m, there was no longer any trace. This valley is used in winter with snow by ski mountaineers to reach the Castelat saddle and the homonymous peak. I take the map of the Tobacco and notice that I am definitely off the track, totally shifted to the right, but just in time to try to get in the right direction before I find a challenging rock ridge.
So I throw myself into the woods covered with a soft blanket of dry leaves. I keep the altitude and go around the rocky ridge at the base following a timid trace of a roe deer. The ridge is called Filone Scoat and, passing it, I manage to reach the Scoat Valley where the path with the obvious trace awaits me.
Now the climb becomes more decisive, always constant on natural steps created by cushions of grass and outcropping rocks. On certain occasions it can be seen that the rock is of the Karst type with sinuous hollows modeled by the erosion of the water that digs in depth. Ahead you can only see the climb, straight ahead to the top now hidden and moved to the right. Behind, however, an incredible spectacle on Lake Santa Croce, the Visentin as a guard and the entire Alpago at the foot. The sun peeps out just as I'm looking at the view and paints the larch trees just left behind with bright yellow / orange colors. The climb is not difficult and allows you to quickly gain a lot of altitude.

Compared to the track marked on the Tobacco map, the real path at an altitude of 1800m remains on the left and in fact goes up an old landslide, wide, which is well settled and comfortable. The path points straight to the Filone del Guslon, at an altitude of 2000m there is the deviation on the right that allows you to overcome the ravine of the landslide and you return to having the mixture of rocks and grass. Here I find the first signs of frozen snow that make the grass below a bit slippery. The path is always well marked by red dots on the rocks and, even in the face of the humidity of the ground, it allows safe progress. On the right you can see the steep slope that ends in the Cadin Valley, on the left the last rocks mixed with snow herald the final ridge.
In a short time you reach the top of the Guslon Filone (ridge) and an icy and pungent air lashes with decision. The blades of grass are frozen and it is possible to notice that the wind blows perpetually from the North given the conformation of the icicles formed. You see the cross! The view is already a show, but I wait to get to the top to enjoy it.
Last meters on the final ridge which on the left descends into a chasm called Vallazza. On this side there is a ski mountaineering route that allows you to reach the top. The snow is very compact, icy and comfortable to sink the boot and remain well anchored to the ground. Last rocks and here: summit of Mount Guslon, 2195mt less than 2 hours from the start!
Classic caress to the summit cross, this one is made of wood surrounded by sharp ice flaps. I look up and it pays off in an incredible way! We are in the center of the Alpago, almost on the edge of the Venetian Pre-Alps. In front of the Lake of Santa Croce with its crystalline color, on the right the Valbelluna with the distinguishable peaks of Mount Serva and Schiara. Closer to the top of Dolada with the unmistakable crest that leads up to the snow-covered Col Nudo, the highest peak of the Venetian Pre-Alps. Behind these mountain ranges are the Eastern Dolomites, beautiful, clear and clear of clouds. The Civetta and the Pelmo steal the show from everyone. Moving your gaze to the right again you can enjoy the splendid Val Salatis and the peaks that end in the Cima Val Grande. The pyramid of Cima Manera (Cimon del Cavallo) is also unmistakable. But the most exciting spectacle is the reflection of the sun on the Adriatic Sea: the Venice lagoon seems incredibly close on this clear and spectacular day!
At the top I also know Massimo and Francesco who, very kind, give me a real photo shoot. They are from Belluno and they too were impressed by the spectacle that this view can offer in the round. I try to take some shots with the drone, but the wind doesn't allow me more than a quick 360 degrees.
In the meantime, I dressed in a shell and a wool cap, I retrieve all the equipment and go down at speed to avoid having to wear gloves as well. The descent is also simple and the red marks on the rocks are distinguishable as easily as the ascent. At 2000m, at the deviation of the Filone del Guslon, be sure to take the descent on the left and resume the same route taken on the outward journey. In fact, here there is a track on grass that is misleading and leads to the crest of the Guslon Filone and then suddenly ends. The return, therefore, is carried out along the same track as the climb, enjoying at every step the splendid view of the lake and the Alpago. Pay attention in this period where the morning ice, now melted, softens the ground a lot, making it slippery in some places.
In an hour, including the classic breaks, you return to the dirt road that soon leads first to the Pian delle Lastre and then to the parking of the Monte Cavallo farmhouse at an altitude of 1211m.
Another mountain added to the list of my adventures, a new discovery of a less noble peak but which offers incredible emotions. A route for trained hikers, simple but with a great panoramic impact. A true pearl of the Alpago of wonders!