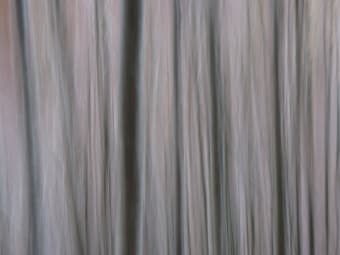 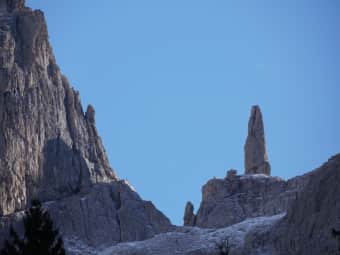 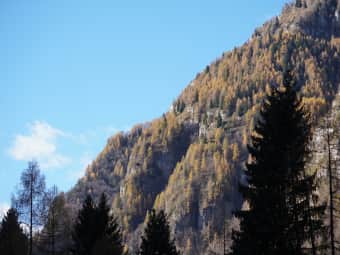 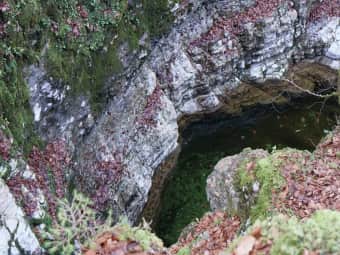 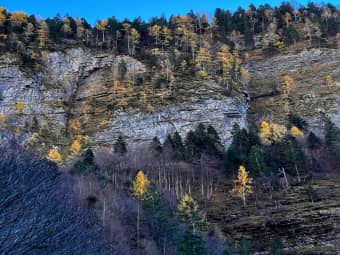 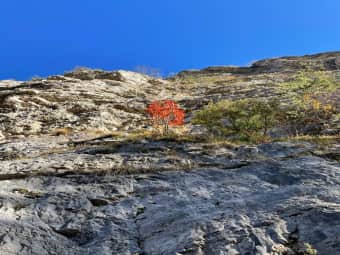 It is a pungent day at the end of November and together with Enrico we have decided to undertake an excursion to the Bianchet refuge in the Agordino area. The morning is splendid, some low clouds in the Feltre area had worried us, but here between La Muda and La Stanga, the sky is clear and very blue.
We park in the second open space passing La Stanga, on the bend before reaching La Muda. We decided to start from this parking lot to enter the Val Vescovà gently and thus avoid the steep steps of the most popular starting point. The path is, in any case, the CAI 503: let's go!
The road is paved for the first two hairpin bends, then passing over a stony road that enters the woods. We are traveling along the Variante dell'Alta Via number 1 which connects the mythical Lake Braies with Belluno.
We proceed at a good pace and skirt the overhanging walls that loom directly over the path. They actually inspire a certain fear for the possible fall of some pebbles. The height of over 50 meters and the pronounced verticality make this passage very characteristic. Even Ottone Brentari, in his book “Guida Storico Alpina di Belluno e Feltre” of 1887, wrote as follows: ”The valley from Peron to Stanga is, if we take away the few named houses, barren and deserted; and the bottom of it all occupied by the stream and the road. The mountains that surround it are almost sheer with a few stretches of grassy coast, cut by zig-zag paths. Tower here and there, alongside and at the bottom of the ravines, peaks of curious and varied shapes."
After this stretch, turn NE and enter the real Val Vescovà. The vegetation begins again, the beech forest makes its way and we meet the other CAI 503 track which joins the itinerary we are following.
We proceed accompanied by high rocky walls on our left, in some points with large collapsed pieces. One in particular, well signposted, invites you not to stop in the short stretch exposed to the landslide. These massifs, precisely on our left, end at two peaks called Coi Alti and Coi Bassi. On the opposite side of the valley, however, we can see the vegetation clinging to the overhang created by the peaks of La Spirlonga and Monte Coro. To unite these two sides a deep and invisible canyon.

We continue gaining altitude in this very dark and narrow valley. The sun, at least at this time of year, has a hard time warming up. The few rays that pass guarantee only a few minutes of sweet tempo. At an altitude of 900 metres, where the beech forest has taken over the surrounding environment, a series of hairpin bends begin which make us climb decisively. A carpet of dry leaves interrupts the silence. Let's proceed by gradually choosing the most beautiful and fastest shortcut. Thus we arrive at Sass de i Companc' at an altitude of about 1160 in a slightly wider point where it is possible to briefly leave the path and see the birth of the canyon from the stream that runs through the valley. We cross the stream and proceed uphill making a single hairpin bend and then proceed almost flat in the E direction. We are over 1200 meters above sea level, the beech forest gives way to a thick fir forest which soon opens onto a plateau from which the Bianchet refuge stands out!
The refuge is named after the Belluno mountaineer Furio Bianchet who was one of the protagonists of the sixth grade with the group of "Belluno" in the thirties. Among his conquests, the direct route on the South-West face of Cimon della Pala called "Via dei Bellunesi".
We have therefore reached the Pian dei Gat clearing, on the slopes of Monte Coro, on one side, and Col dei Gai with the Talvena on the other. Magnificent fir trees surround us from which we can see the most beautiful panorama of the day: Mount Schiara candidly covered in snow today! It is also possible to distinguish the famous pinnacle of the Gusela del Vescovà, a typical rocky bell tower conformation, inevitable in the panoramic photos of the Schiara.
The cold is becoming more bitter, we are below zero, the sun is hidden behind the imperious silhouettes of Mount Coro. We quickly refresh ourselves and continue the descent from the same route as the ascent.
In the middle of the Vescovà valley a shy sun peeps out, useful for regaining a sweet warmth that was missing from the morning. The sun manages to dye the rocky peaks of the vertical walls a warm orange that lead us back to the car and to the end of our adventure!
Thus concludes a beautiful excursion in an area little frequented by the usual occasional tourism. A sought-after refuge that is very convenient as a stopover to reach the Schiara or the famous via ferratas in the surrounding area. A place suitable for relaxation and contemplation of the authentic mountain.