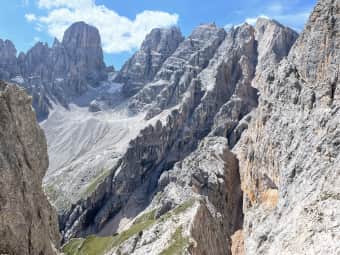 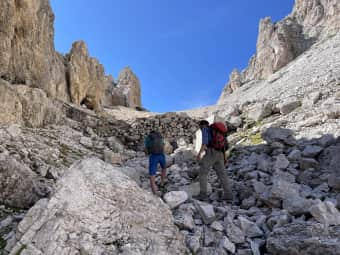 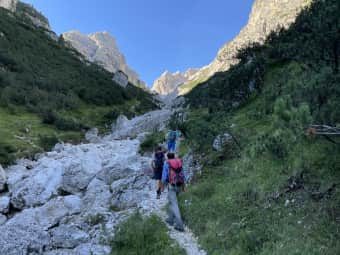 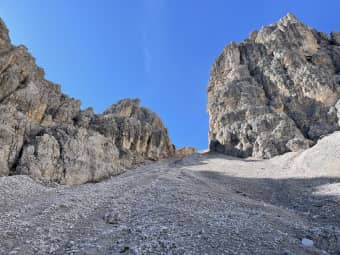 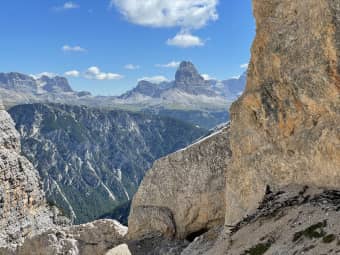 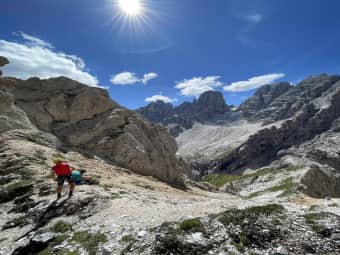 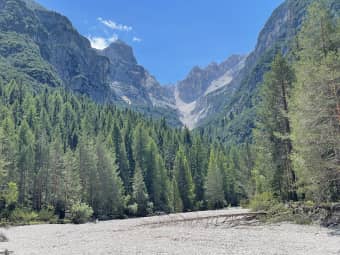 New adventure on the crystal group departing from Carbonin. Today's goal is the Rauhkofel fork on Mount Scabro, the Austrian defense bulwark in the First World War.
I start first to make some clarity on the nomenclature of these places. Given the Germanic nature, even if I have documented, I can run into some mistakes or translation slip. If some German -speaking hiker or expert in the area, read this article and found inaccuracies I will be happy to correct them.
On the topographic maps of the area it is easy to find the denomination of Rauchkofel, in Italian Monte Fumo (or Monte del smoke). The mountain in question is always part of the crystal group and divides Val Fonda (Tiefental) from the Val della Fontana di Sigismondo (Mundsbrunntal). This mountainous language is characterized by two points that predominate on the rest of the crest: one at an altitude of 2126 meters each other at 2343 meters. The last point of discontinuity before reuniting with Costabella (or Costa Bela), and consequently to the crystal group, is the Rouhkofel fork. On the maps, the fork is marked with the correct "Rauhkofel" nomenclature where "Rauh" means rough, rough. Hence the derivation of the original mountain, precisely Monte Scabro. Also in the book "Secret itineraries of the Great War in the Dolomites - Third volume" on page 68 there is a pen representation of the isoipse and enemy stations on Mount Scabro that the Italian army had produced to study the best way to attack. In fact, it is reported on this sketch m.te Raukoff where "Rau" is precisely the same item that identifies "rough", "Scabro", while "Koff" stands for "Kofel" which means "Cima del Colle". Certainly over time, perhaps with the various relationships made by the Italian officers during the Great War, there was a transcription error from "Rauh" to "Rauch" (smoke). From here, in fact the name that we still have on the maps: Monte Fumo. I will always call him Monte Scabro (or Rauhkofel).
Let's go back to the present day. A beautiful company made up of the inseparable Diego, the legendary Edoardo, Riccardo, a new companion of wild adventures, and the undersigned, is ready to start towards the fork. We start from Carbonin, just before the Hotel Croda Rossa in a stop on board the SS51. We aim rights to the Valle della Fontana di Sigismondo, we wade a small stream that acts as an immissar to Lake Landro not far from where we are. We pass a small meadow still damp of dew and we go into a fir rack. We reach the dirt road that joins the cycle path and enters the woods. We arrive at the crossroads where a track climbs into the dense vegetation towards S, while the other continues in the direction of the road to O. The first path is the old signpost that leads to the top of Mount Scabro through a feast of Mughi up to the crest and subsequently at the top of the share of 2126 meters. We choose the second path and aim at the rio of the Rio della Valle della Fontana di Sigismondo. We reach it in a very short time and travel it for a few minutes.
Mount Scabro and Costabella begin to rise between the two banks of the Great. At an altitude of about 1500mt there is a track that rises on the left orographic side and enters the vegetation. The path is dotted with Cai white-red signs: this itinerary, in fact, was a marked "red" signpost on the Tobacco map of a few years ago. Evidently now it is no longer maintained and, therefore, reaching Monte Scabro da Carbonin and then descending to Val della Fontana di Sigismondo has become in all respects a "wild" itinerary. We constantly gain altitude up to about 1700mt where we pass on the right orographic side of the riverbed and the vegetation changes in the usual hated/beloved Baranci. We are therefore under the vertical walls of Mount Scabro which first appear gray-blacks from the continuous flow of thin lines of water that occasionally drip on our heads. On the other hand, the green grooves interspersed with compact gravels of the Costabella. We are practically in correspondence with the top of Mount Scabro, 300mt below. Who knows how the Austrians were arranged on this side, in 1916, defended by these walls, safe in the stronghold. On the opposite side in Val Fonda, the Italians, from a gully that rises from Colle Edoardo try to reach a trigger at an altitude of 1979Mt just below the top. They wanted to try an ambush, a surprise attack, but this mountain proved to be impregnable.
We continue on the path with the Mughi who thin out and leave room for a gravelly trace. The walls of the Scabro begin to become an ocher yellow and we begin to see the first impluvies of gravel created by recent landslides Just below 1800mt, a landslide took away the original path. We remain at altitude by overcoming some not too hard gravel walls. The official path, on the other hand, at this point descends almost inside the rio rio, to then go up to the direction if and focuses the rocks at the base of the top of Mount Scabro. A white-red patch is also visible on a large yellowish boulder. From our position, however, we have not clear the state of the path that leads to the top. From an altitude of about 1900m, we are forced to juggle in the rio rio. A series of stacked boulders allow easy progression first on dry row and then directly on the weak Rio. The route continues in this way, orienting itself "exposed", up to an altitude of approximately 2100mt.

We are now in the real scree that heralds the fork. We can see it in the background, straight with a beautiful vertical slope that awaits us. We proceed on gravel first with medium -sized stones in precarious balance, and then vary on fine gravel. On our right the bifurcation that leads to the scree joins the Costabella crest is presented. The last meters of altitude are demanding, not excessively, but the slope makes itself felt. We maintain the right orographic slope of the scree to avoid some high impluvies of hard gravel. We skirt the high walls of Mount Scabro and proceed on slender traces with a decisive slope.
Thus we come to a small "plateau", almost a depression, made up of arts stitted to art. With great surprise, we find the remains of bones: vertebrae, femors, tibies and jaw (with annexed teeth) of a large deer (it seems from halves). The mossing aspect and woody hardness make us think that it could have been an excellent banquet for the Austrian soldiers of the Great War. The location in which we are, in fact, seems to be created as a refreshment area given the presence of many remains of milk, wooden pieces and also a piece of an old (or other crop) dish in white ceramic. We take a few meters towards the fork and find a location of an old jacket: dry stone wall, wooden axes, old wavy iron canopies, sharp fittons and iron poles are picked on this second advanced plateau. The fork is increasingly visible, we begin to see the shape of the crystal. The walls on our left begin to create windows on the Val Fonda side. One of these natural openings gives a spectacular view of Monte Rudo and on the three peaks of Lavaredo. Last steps, and here, Rouhkofel fork!
In all its splendor we can admire the crystal that stands out of an unusual angle where the majestic cross installed behind the Lorenzi refuge stands out alone alongside the Stounies fork. From this side we can see how this gully is almost vertical, with a slope that will surely reach 55 ° with a furrow in deep gravels and an orange-gray color. By moving the gaze to the left we notice the magnificent crystal glacier recently cheered by a little fresh snow. Then passing through the Piz Popena and finally to the crystalline of Misurina. The view of the crystal circus is priceless. To think that three years ago Diego and I were there, in the same period, to face that glacier with large crevasses, now visible (relive the adventure here ).
Meta achieved, the fork at an altitude of 2400mt really gives fantastic emotions! From here, the intrepid Diego, Riccardo and Edoardo attempt the opening of a new descent route to return to Val Fonda. A bold decision that made me tribulate in the decision to follow them. Looking carefully and studying the walls of Monte Scabro from the Val Fonda side, it triggered a sixth sense in my head. The vertical restidity, the absence of a slightest track and the final jumps of rock that seem to be present just before going down to the valley, made me give up. I therefore go back to my steps, while the rest of the company tries the company. Will they have made it? And above all, how will they get off?! Discover the fantastic descent into This detailed report Diego!
I go down solo and retrace the same steps of the first leg. In the scree, as in the subsequent rio rio, the road chosen is different from that of ascent: the track is followed by gradually recognizing the easiest and most safe path. Return to my dear and beloved Mughi on old track Cai, until you reach the horizontal riot to the bottom of the Valle della Fontana di Sigismondo. Here I decide to travel the womb in full and thus reach the parking lot on the shortest possible road. Except for some "radots" in the final he proved to be a spot on.
Thus ends a splendid excursion in the crystal group in a specific place where very important war events lived during the Great War. An adventure suitable for medium prepared hikers, not difficult, but which requires experience on impervious and eye to find the most suitable and safe way.