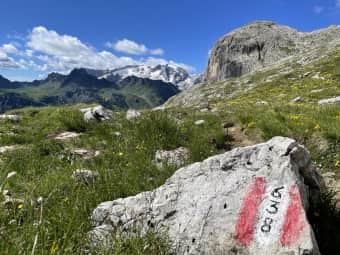 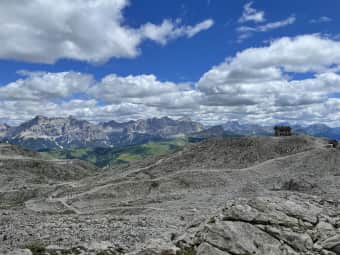 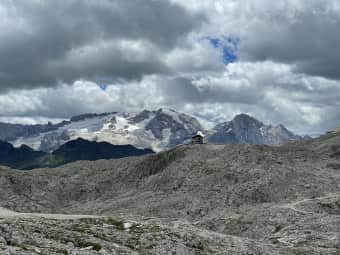 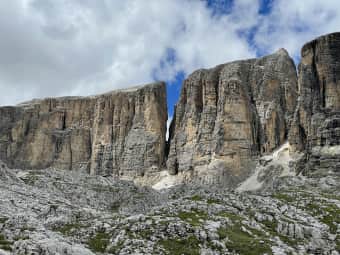 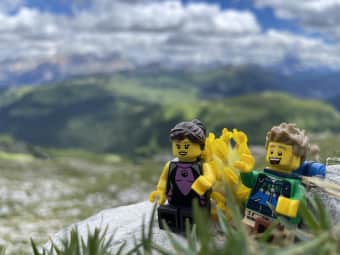 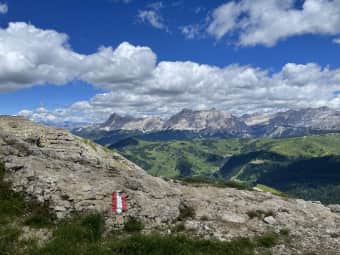 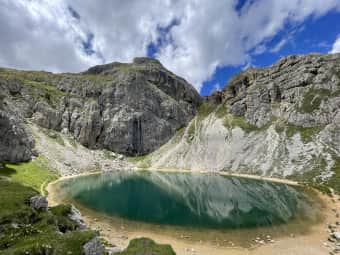 Last excursion of our summer holidays in Alta Badia. To round off these wonderful days in Trentino, we decided to embark on an adventure on the majestic Sella group.
Departure from Corvara, in the large parking lot from where the town's many ski lifts depart. Giorgia and I today choose the first part of the comfortable ascent thanks to the Piz Boè cable car, which in a very short time allows us to gain about 700m of altitude difference and we reach the Crep de Munt at an altitude of 2200m. The view as soon as you get off is breathtaking: from Sas dla Crusc passing through Lagazuoi, Pelmo, Civetta up to the legendary Marmolada!
We begin to climb towards the refuge by choosing the CAI 638 path which develops just below the second section of the chairlift that would take us comfortably to Plan de Sas at an altitude of about 2500m. We choose to go on foot, also because, 10 minutes away, there is a very pretty lake, Lake Boè also known as Lech de Boà. This beautiful turquoise lake is absolutely worth a stop to contemplate its beautiful waters full of small fish and observe the nameless walls that are reflected giving a spectacular view.
Leaving the lake we head towards the S towards the chairlift. There are some traces that would lead to continue in the stony ground just below the chairlift, instead you have to cross the scree and, on the left, we find the clearly evident path of path 638. The track is really beautiful between rocks and gravel interspersed with some tufts of green and flowers. Giorgia also defined it as a “fun” path due to the continuous variety and the search for the best route, sometimes even climbing small jumps of rock. The route continues on the rocky ridge and develops towards the SW, offering remarkable glimpses of the Marmolada that will leave us speechless.
The occasional grass makes room for gravel and pure rock as we rise in altitude. At 2400m we reach a saddle from which we can admire a splendid view of the Cadore Dolomites. Here a fresh and biting wind begins to be felt. We actually reach the Plan de Sas from which we see the arrival of the chairlift on our right. In front of us are majestic Dolomite walls such as the Piz da Lech and the Sasso delle Dieci (Sas dles Diesc) from which you can see the Moser saddle and the unmistakable La Fessura saddle.

We are in front of the Valun del Boè amphitheater. A lunar landscape that among scree, pink vertical peaks and rocky ridges: it seems to be in a film setting. Last meters of altitude and we reach the natural terrace where the Kostner refuge was built. In front of the refuge, to note a beautiful stony pyramid, we can define it as a "little man", with stones painted in bright colors. The Kostner dominates a truly breathtaking view over the entire Alta Badia, the Ampezzo and Cadore Dolomites, up to the Marmolada to close the circle. On the other hand, a frame of high walls of the Sella precludes the view on the top of the Boè, but also offers unpublished postcards on this side.
Break at the mandatory refuge with a splendid polenta (the best eaten so far in the refuge), mushrooms and cheese. Since the weather is splendid, I try to follow the Roda del Vallun path to look closely at the attractive mountainous amphitheater. I leave the refuge and head towards the NW where the signs also indicate the Ferrata for the Piz da Lech. The path in the first part gains about 100mt in altitude, then it develops more or less always at high altitude close to the walls of the Sas dles Nu (Sasso delle Nove or Cima Nove), the Sas dles Diesc and the Piz da Lech. Close to La Fessura you are enchanted by how the blue sky touches the fork suspended between two blades of rock: beautiful! Although it is a hot summer, there are still some patches of snow and some small streams as proof that the sun does not peek out very often here. Arrival close to the Piz da Lech and at the start of the via ferrata. Here a few short patches of green intertwine with the gray stones. Clouds covered the entire amphitheater and the refuge that can be seen in the distance. The temperature drops a few degrees and begins to get chilly. I then return at a good pace in the direction of Kostner to go down with Giorgia who, for this short escape, had waited for me in the refuge.
We descend quickly from the same ascent path. Leaving the Plan de Sas the sun returns to warm us with its rays. The panorama, with the warm light of the afternoon, has continuous changes of color that are increasingly bright that enhance all the splendid colors of the Cassian Dolomite.
Let's go back to Lake Boè and here too the late afternoon sun gives an incredible emerald green color. I recommend the view of the lake in the afternoon to enjoy its best expression. We return to the start of the Boè cable car and pause for a few more minutes to enjoy the wonder that the mountains of Alta Badia can offer.
An excursion ends in the heart of the Sella group where you can see the nature of the bare rock that this mountain complex possesses. The Kostner refuge repays the effort made to reach it very well: there is the possibility of taking the second section of the chairlift which practically leads to the same elevation level as the refuge. I recommend the adventure as described in this report to average trained people, while with the use of both sections of cable car and chairlift it becomes an excursion suitable for everyone.