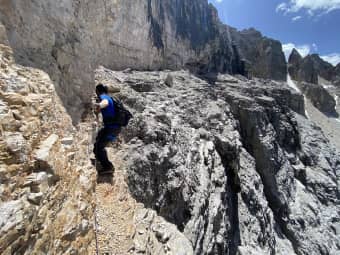 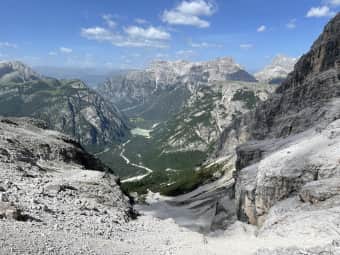 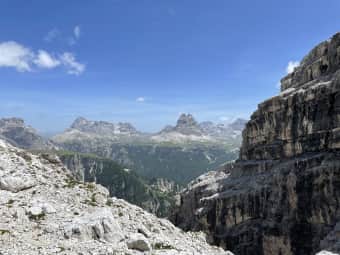 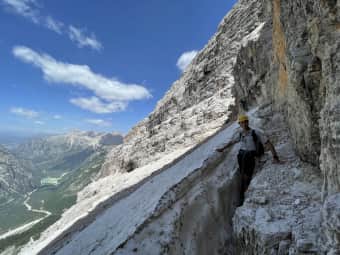 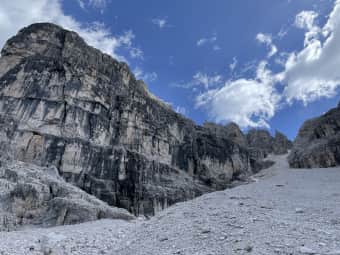 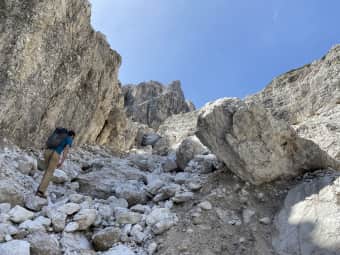 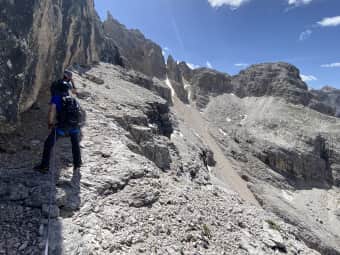 A new exploratory adventure for in the Cristallo group together with the inseparable companion of "wild" adventures Diego and the legendary Alpine Guide Edoardo. Today's destination is the north ledge of Cristallino di Misurina, an almost unknown ledge made known in the book by Vittorino Mason in " The book of ledges. 56 horizontal routes in the Dolomites " and traveled by Fabio Cammelli whose report is present in the CAI magazine " The Venetian Alps " of spring / summer 2020.
It is June 18 and already in the morning a clear day, free of clouds, warm and perfect for today's adventure promises to be. We reach the Ponte de la Marogna in the Val Popéna Bassa, before Carbonin coming from Misurina. We have light backpacks and with the bare essentials to better juggle the adventures that will surely appear on our journey today. We proceed towards the SE crossing the dry riverbed of the Rio della Val Fonda and enter the bush. Here the trace is evident and there are red stamps on rocks and trees. In short we reach a commemorative plaque of the First World War. We go around the plaque on the left and the wood becomes a succession of narrow and deep gorges that wind through the vegetation: we are literally immersed in the historic trenches of the Great War! As exciting as the situation may be, we must think rationally to avoid getting lost in these tunnels. Always keeping a direction towards the SE, we overcome the trenches gaining height difference in the wood. We find a timid trace a little further on in which we distinctly notice some recent "cleaning" work with sheared mountain pine branches. We are accompanied by the sound of the stream that descends from the Val Cristallino, but we never see it among the foliage. We arrive at a kind of crossroads and keep to the left where there is a boulder with a faded red mark. From here the track becomes wide, remains at high altitude and proceeds for a long time in the vegetation. With the Tobacco application we look for the correct point to deviate in the direction of the Val de le Bance. At around 1680, the app tells us to turn off onto a rather uncomfortable old landslide stream. A little further on we find a path that seems well marked and visible that goes back into the woods. We choose to follow it and with a comfortable climb we come to intersect a very wide and super-marked path that connects the entrance of Val Popéna Alta with the CAI 222 trail.
Thus begins the real Val de le Bance with vegetation that gradually thins out and leaves room for a comfortable scree that winds its way between the Croda de le Bance and the imperious Croda Mosca. Up to an altitude of 2000m the ascent is agile and very comfortable. Then the valley becomes narrower and narrower and you are channeled towards the homonymous saddle de le Bance. At the base of the bottleneck we keep to the right orographic side, actually skirting the Croda Mosca and starting to climb the first jumps of rock that arise. The boulders pile up one on top of the other and, on several occasions, require climbing to overcome them. We manage to overcome all obstacles with relative ease. Every now and then I allow myself to look back and my throat seems to have to swallow and suddenly drag everything down. I look back towards the saddle and the verticality of the cracks is so accentuated that it seems they must fall upon us instantly. We arrive at the height of a small snowfield that invites us to move to the left orographic side. Here we proceed in the most demanding stretch where the high slope of the valley becomes prohibitive when on the bottom there is that light gravel that does not allow a secure grip with the boots. A last climb of a rock jump of a couple of meters, some easy rocks on which to gain the last difference in height and reach an altitude of about 2500m where a nice wide open space awaits us.
The view is spectacular on the Tre Cime di Lavaredo, Mount Rudo and the lower Mount Piana. This large and comfortable clearing allows us to rest and look around. Right in front of us we notice a carving in the Cristallino rock that looks like the ledge we are looking for. I recognize some points photographed by Fabio Cammelli in her report and there is no doubt, it is she, the Raule ledge! We are separated by a few hundred meters as the crow flies and a deep valley with an adjoining snowfield. We note that a small wall divides us that we agree to overcome, assured to our guide Edoardo for safety, since a false step would lead us straight into the snow-covered reservoir tens of meters high. We prepare the harness and the helmet, we tie ourselves up and the roping begins.