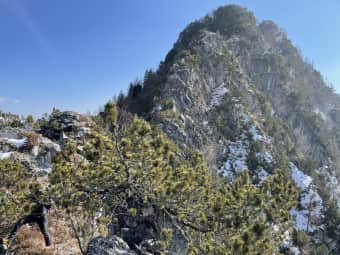 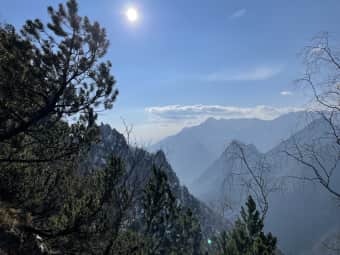 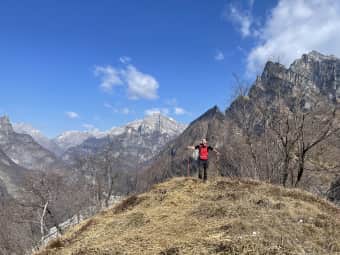 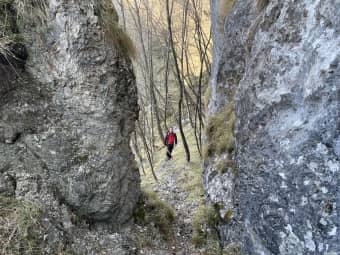 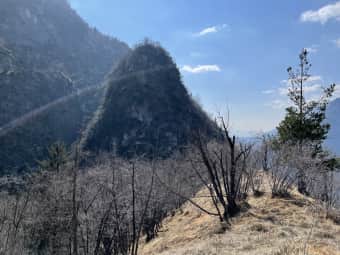 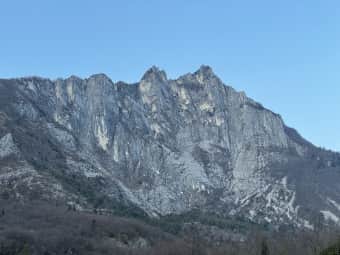 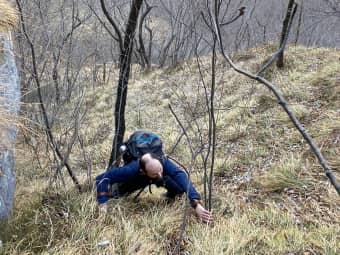 Sedico, Belluno Dolomites.
Clear and pungent day in the early morning. Companion of today's adventure is the legendary Diego: when there is to "ravanare" and discover new routes, it can only be him! Today's goal is Mount Peron, a mountain block that some attest to as the final part of the Schiara group.
Also named by the historian mountaineer Ottone Brentari in his " Historical-Alpine Guide of Belluno-Feltre-Primiero-Agordo-Zoldo " of 1887: " Peron, a few houses built near a large boulder (pietrone = peron) who gave the name to the place ". The historian does not report more details regarding the ascension of this rocky block which gives its name to the town below. For this reason, it is imperative to try to reach it and to do it in the best possible way: by exploring the area through unprecedented and spectacular routes.
From Belluno we quickly reach the town of Peron, leave the car on the left of the state road, in a parking lot overlooking a Tibetan bridge that allows you to reach the fascinating Certosa di Vederna with the imposing Piz de Vedana that overlooks it.
We fasten our boots, rucksack and head to the town of Peron, climbing a narrow and bristling street. After a few hundred meters, the road gives way to a shy path well delimited by small dry stone walls. The area is semi-wooded born on an old landslide of which you can still see large boulders stacked on the sides of the track. This path is a CAI route marked on the map as "Themed Path Chiesette Pedemontane", this path continues to the right crossing a landslide just below the looming peak of Peron and continues towards Pian de Fraina. Obviously we choose the deviation to the left, at an altitude of 600m, on a path that was at first clearly evident on a new grassy stretch. This track tends to the northwest following the Peron coast. You gain altitude very slowly until you reach a small rock jump of a couple of meters to climb with ease. We soon arrive, with the path that gradually disappears, to the Col delle Pere from which you can glimpse the magnificent gravel bed of the Cordevole stream below us among the foliage.
Our idea is to reach the saddle to the east of Colle Salere and then go up towards the crest of the Pale di S. Giorgio. We make this prediction by carefully studying the Tobacco map, where only green is marked, which equates to portions of vegetation only. We leave Col delle Pere heading north, trying to gain altitude in the direction of Colle Salere.
In fact, we leave the faint trace to begin the real exploration on a ridge that becomes more and more pending and difficult. One can imagine Ottone Brentari in 1887 that from the Cordevole valley, he looks in the direction in which we are: “ […] you arrive towards the stream. Beyond this, the Cordevole valley opens up. […] The valley begins to get narrow closed by high walls. Beyond the stream is the Col di Salet [...] ”. The Col di Salet is in fact the Colle Salere and the "high walls" have remained intact from 1887 to today: the slope in fact becomes more and more sustained. We have to climb between grassy crags and shrubs which fortunately allow us to secure and advance by holding on to force. We overcome a stretch at the base of a rock wall of about ten meters. The climb is increasingly vertical. Thanks to the birches, the tufts of grass and the roots you continue to climb easily but, turning around, you can see that the progression is taking place almost on a vertical wall. It is here that among the slightly denser foliage I place myself on a tree to gain a more comfortable position and that allows me to catch my breath and strength: a branch acts as a sling and from below lets my water bottle out of the external pocket. A dull thud, followed by two others, then a continuous succession of hissing towards an unknown destination. For the last time I see my bottle, a memory of Mont Blanc, disappear into the ravine and with it the liter of hot herbal tea inside it. The cold is bitter on this northern side and a hot drink would have been very tempting. I do not despair, I greet the bottle knowing that I will not be able to retrieve it (who knows where it stopped ...).
We are over 960mt, we see a softening of the wall and here is Colle Salere. From here the problems begin: our goal was to go down towards the bed of the stream east of the hill and go up on the grassy ridge in the direction of the Pale di S. Giorgio: impossible! To the east of the hill we see in front of us a very deep gorge with sheer rock walls. The same hill on this side is practically on live rock. Diego tries to go on a reconnaissance to see if it is just an appearance, a small trait: no. The entire bed of the stream, tens of meters below us, looks like a canyon bordered by two inviolable rock walls. We are many disappointed by such a serious lack on the part of the Tobacco cartography: these jumps of rock are absolutely not marked at this point!