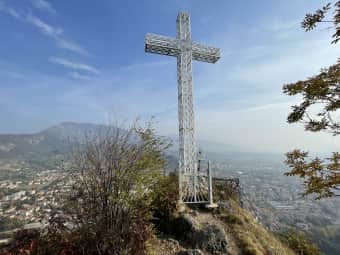 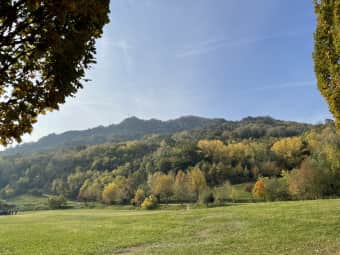 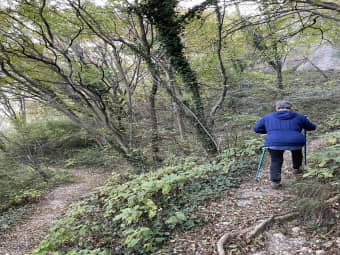 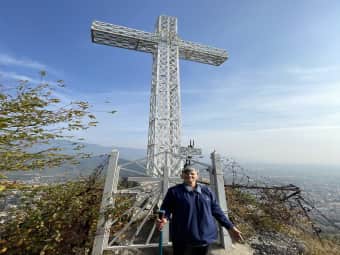 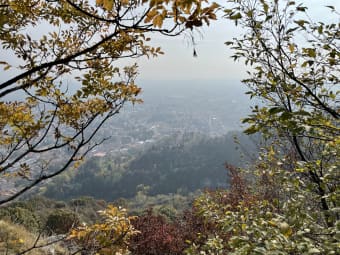 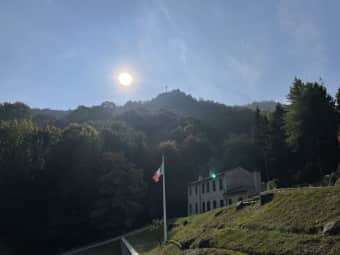 Today's excursion is not exploratory, impervious or daring, but it is in effect a first ascension. Not for me, but for my mother who at 62 years of age to do the feat! For all intents and purposes I was the guide, also a new experience.
Departure from the Fenderl area, not far from the city center of Vittorio Veneto, a green lung where parties and gatherings in the open air are usually organized. In fact, today we found a Boy Scout gathering. We park the car, my mom is ready with the 100 grams of the Camp and dressed from head to toe in the Quechua (almost more technical than me). The only flaw: the shoes at the limit for a hike, albeit a short one, inside the woods.
Let's go! We walk along the tree-lined avenue that encloses the Fenderl area until we reach the entrance to the CAI path 1042a, unfortunately not adequately marked, but still distinguishable from a dirt road that proceeds in a south-easterly direction for a few hundred meters, and then deviates with a sharp climb to the west. We soon reach Casera Bastanzetti, a well-restored farmhouse with an imposing pole with the Italian flag flying in front of it.
We follow the path straight, we avoid turning left where a beautiful wooden bridge invites us, and we reach a capital with the Madonna and a prayer for the bakers of the province of Treviso. From here we take the left and follow the track that creeps into the woods, sometimes dense, remaining mostly at high altitude. We reach a deviation on the right that allows us to gain altitude by overcoming a series of well-stepped boulders. Here we actually leave the CAI path and go into unofficial but well-traveled routes marked with the tricolor on the trees.
My mom continues at a good pace also thanks to the faithful sticks that allow her to progress safely. A couple of hairpin bends and we arrive at the foot of a rocky ridge that identifies the top of Monte Altare. Now we have to get around it. We choose the left path that continues to climb: here the path becomes narrower, looking at the panorama you can already have a splendid view of Serravalle, Santa Augusta and San Lorenzo.

After just 35 minutes of walking we arrive at the crossroads that leads to the last ridge to get to the cross. Actually, I did not remember this road so steep and, at times, slightly exposed with steps created by sedimentary boulders excavated by the erosion of rainwater. Here the mother gives the best of herself and manages to overcome every difficulty like a roe deer. Let's not forget that she also suffers from vertigo and the conformation of the climb certainly does not help. The presence of artificial steps, created with pieces of bricks between the rock crevices, help in the most difficult points. Last steps, wedged between the rock ridges where we note the presence of old metal eyelets that in the past housed cables of the same make.
Here is the cross: we are at the top of Mount Altare! 350m above sea level, a trifle compared to my usual adventures. However, this is a more heartfelt and family excursion. The majestic, immaculate white metal cross was built, in part, by my maternal grandfather Luigi (Gigi) Da Re. Also for this reason my mother's first ascension tastes even more satisfying.
From here it dominates the whole of Vittorio Veneto: Serravalle on the left with Mount Baldo and Santa Augusta that frame the Col Visentin behind it. On the right the col San Paolo, the Castel del Vescovo and Ceneda. Unfortunately, today the day is a bit hazy, otherwise you would see the bell tower of San Marco in Venice glisten! A nice refreshing break and we organize ourselves to avoid going down the same side of the first leg where the last piece would be really challenging downhill. We then head south-west towards the real summit of Monte Altare (450mt), skirt it on the right and take a path, always marked with the tricolor, which remains at high altitude and then makes a descent with a couple of hairpin bends. This route is very comfortable, not at all oppressive from the point of view of the vegetation, a wide path with roots that allow you to have natural steps. Arrived at a crossroads, we deviate to the right on the path that descends and which has as a sign the red marking "C ... P" on a white background. The path takes us down to the east and, after passing a ruin of an old dairy and a small crashed trunk, we find a new deviation. We always follow the road marked “C… P”, on the left, interspersed with the tricolor signal on some trunks. The trail remains very well marked, clean and wide. We are immersed in an airy and silent wood. We also find some nice “crazy” chestnut hedgehogs that bring good luck. When the forest opens, we notice that we have returned to a point we had already reached on the way: the Madonna of the bakers. We thus reach Casera Bastanzetti from behind, we rejoin the CAI path 1042a and in a short time we are back at the parking area of ​​the Fenderl area.
With the experience gained, the best path to reach Monte Altare is the one we traveled downhill. It turned out to be the simplest, most comfortable and truly affordable for everyone. This avoids the crest which for some may prove too complicated.
This is how my mother's first ascent to Mount Altare ends, at the age of 62 and after a meniscus operation! Really a great feat for her! A short excursion but which contains in itself a whirlwind of priceless emotions!