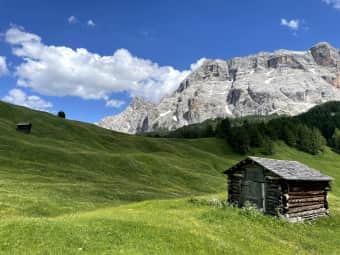 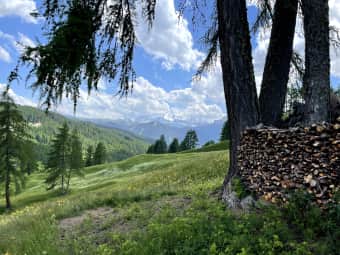 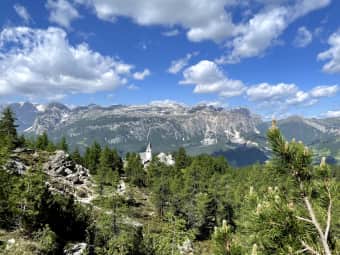 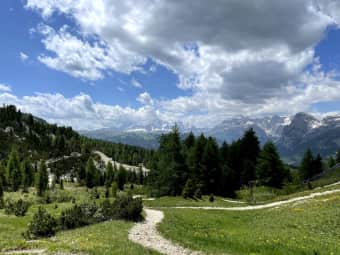 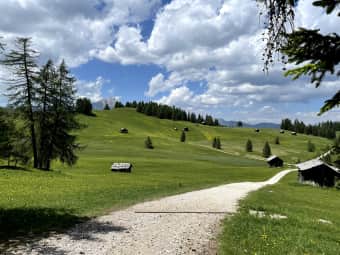 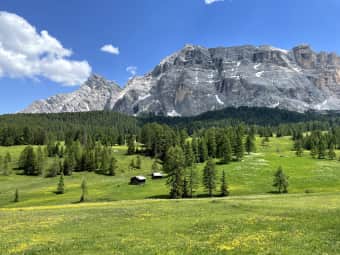 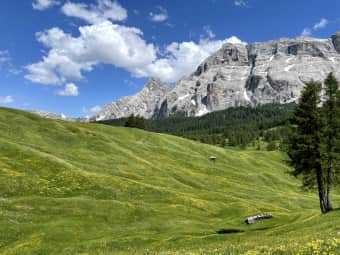 Sunny day, the thermometer already marks a considerable temperature for the season, not even a cloud in heaven. The usual breakfast of sweet and fragrant delicacies and I and I and Giorgia is ready for another fantastic adventure in Alta Badia. Today's stage is a set of places that can be reached in a single excursion: you have to keep in mind only the length of the path that is not for everyone!
We reach the village of Badia where, at the beginning of the road to the center on the right, the chairlift starts the Crusc. Two blocks composed of a chairlift and an airway that allows you to quickly reach the 2000mt quota starting from just over 1300mt. We opt for a one-way race because on the return we count to reach the autonomy car. Already the climb in chairlift gives a wonderful view of the meadows of San Leonardo (fraction of Badia) and on the imminent massive dolomitic pink of the Sass de la Crusc or Sas Dla Crusc (Sasso della Croce). The second troncone of Abovia obliges to turn around 180 degrees in the opposite direction of the massif to remain surprised by the spectacular view of the Puez group, Gherdenacia and Sassongher on all, on the Sella group, Piz Boè up to Marmolada!
Arrived at your destination with Ovhia It is duty to make the first photos at the show of the panorama. A few steps separate us from the sanctuary of Santa Croce and the homonymous shelter (La Crsc) right next to the church. The church is a small jewel that is worthwhile to observe calmly. The peculiarity of this place is that all the paths that reach it (Cai 7, 13 and 15) in the final stretch, before arriving at the church, there are small crosses with paintings / photos and descriptions that represent the stations of the Via Crucis .
Our first goal of the day is the snow cave! Then take the CAI 7 path which, up to the bifurcation with the next path Cai 15b, has a pebble composition and a decisive slope. At the crossroads the trace changes and becomes much more pleasant with the path that holds a pleasant upreck, on a dirt road alternating with the roots of the milling pines. In some places the vegetation has taken the upper limiting the width of the path. At about half of the 15b track you get to a small scree and the path becomes totally stony. Here peeps a small snow tongue that resists still warming heat. Looking up again we also notice a roe deer that emerges from a rock above us, turns and disappears behind the boulders. We resume the path is we again in the woods up to 2100mt altitude where we peel again in a scree. This time, however, it is much more imposing: we are under the rocky wall of the Sass de la Crsc and, more precisely, at the top of the Sasso of the Ten (Sas Dales Diesc).
Here the mountain massif gives a little shadow for a few hours of the day and in fact there is a considerable amount of snow, a lot for the season we are. Nevaio relaxes for the entire length of the scree and forces us to a beautiful excursion on the snow! According to the map, it lacks the deviation to reach the cave, but we still don't see anything. We find other people looking back and forth, we check the map also helped by the GPS: we are exactly above the cave! The abundant snowfalls of the last winter season did not allow the creation of the famous cave for late June. It will still take a few weeks before being able to see and access this natural singularity. We do not shoot down and enjoy the splendid waterfall that was formed upstream, hundreds of meters above us, and that gives a wonderful show!

We travel backward path and return to the refuge to refresh us with beautiful eggs, speck and potatoes and a traditional puccia. Now we are ready for the next half: the meadows of the armentara. To the left of the refuge, we undertake the path Cai 15 that at first goes down for a few hundred meters, we take a muddy piece and reach a very large dirt road and with a sweet slope that will accompany us for the rest of the journey. From now on there are a series of huts and small wooden houses that create interesting glimpets are present at the sides of the street. In the background it always stands out the De Sella group and the Marmolada on the left, today especially clear from clouds, is the ideal subject for fantastic views. The path tends to lead to descend thanks to a series of curves and against curves at length in the midst of the forest which leads a little shade necessary for the warm day. In short, at an altitude of 1900mt, the road is applied, holds a constant and straight gait takes us finally to the meadows of the armentara! A relaxed as a green as an eye on the eye, thanks to the season in which we are the meadows are also painted by yellow and white patches that give depth and sinuosity to the meadows. A great deal of small and traditional huts peep out here and there without being reached by any narrow road: it seems that a child has placed them casually to play us. The Sas de la Crsc dominates the meadows making them almost fairy. The total absence of people or other hikers makes you fully enjoy this magnificent view. Some isolated tree allows you to rest in the shade. The few clouds that have been created during the day create darker color spots on the meadows. Every look from left to right is a fantastic postcard! We continue to travel the road until you reach a detour on the left that indicates "Ranch da Andrè". Let's take the small road that now makes us rise for a few dozen meters in altitude until you reach this refuge. Here we find horses, cows and goats that make the happiness of the little ones. We quench ourselves with a nice cold sitting on a table overlooking Sassongher and Gherdenacia.
we then resume the descent towards Badia. The dirt road here takes more decisively than what we have traveled so far. The continuous Anse that creates always create new and varied glimpses. Here too we are immersed in the green, the trees are more present than the meadows of the armentara, but the type of landscape has always been the feeling of calm and relaxation. We also reach a small pond that will surely be used as a trough from cows. We continue to go down quickly until 1600m where we cross a paved road and where we see directions for the nearby Col d'Anvì. We rest on a bench and resume the last kilometers to reach the village of San Leonardo. Here we skirt cows farms and walk the Cai 7a path that develops in a fresh grove. We quickly reach the small center and walking along the main road we just pierce over the parking lot and the departure of the chairlift we left in the morning.
Today's adventure was truly incredible with fantastic and different places for type and beauty. The snow cave, although we could not see it, gave great emotions. The meadows of the armentara, with their relaxing green are one of the most satisfying destinations for a hiker. If you reach a car the fraction of Furnacia, the meadows of the armentara can be traveled by adults and children, even in a stroller. The ranch from Andrè allows a convenient refreshment. Alta Badia confirms the perfect combination of adventure for experienced hikers and for families!