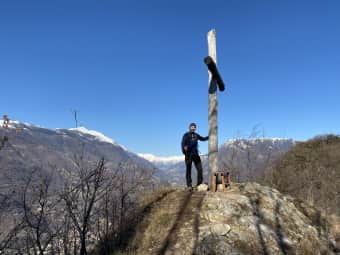 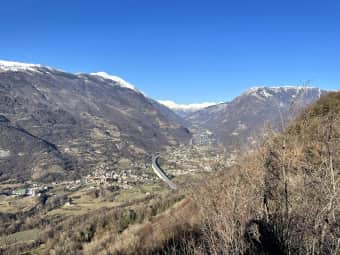 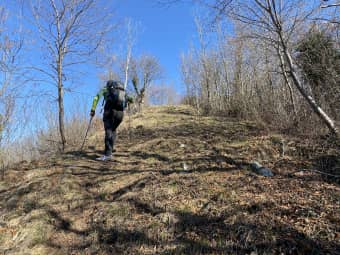 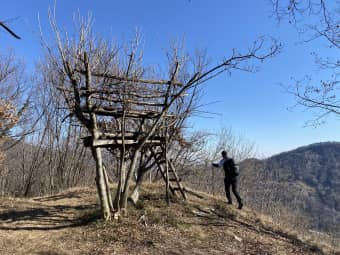 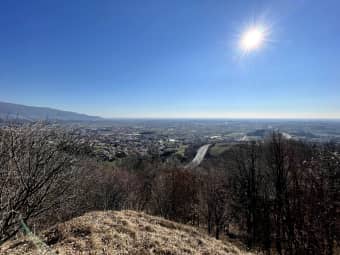 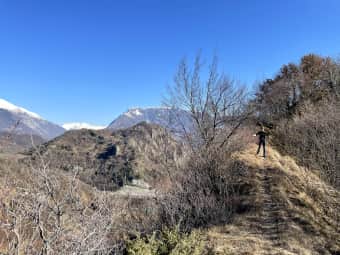 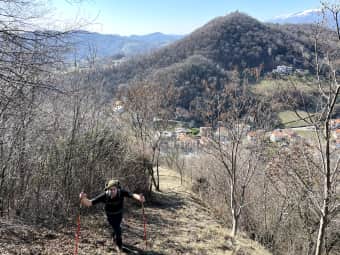 First excursion of 2021. After weeks of bad weather, also forced into the house by COVID, the first adventure of the new year starts from Vittorio Veneto. Thanks to the copious snowfalls of recent times, the itinerary could not aspire to peaks or routes that were too high. The Venetian Pre-Alps, and especially the ones at home, always have a “wild” side. With my companion on unpublished routes, Diego, we plan a ring tour on the less noble peaks of the Prealps, but which guarantee refined views, off-the-beaten path and true adventure!
The Vittorio Veneto Cathedral is the place of departure. The word that will recur the most in this itinerary will be one: crests!
A ring on the Vittoria hills always on the crest, on the blades of land that give life to the sinuous mountain shapes characteristic of the landscape. follows towards San Fris where, at the height of a capital, you cross a small bridge and thus the CAI path 1042 begins. reach the Perdonanze or the Castagnè village towards Mount Baldo. We instead choose the route on the ridge of the Bigontina. After passing the motorway viaduct, the lift path on a loose and slippery surface. At the height of a bench there is the well-marked detour to the via di cresta (Bigontina / Montebello). A short and steep climb soon leads to the top of the hill and from here you have an open view over the southern part of Vittorio Veneto. We proceed with short ups and downs to the second peak of the day, Le Pellagre, where the opening to the north offers a view of the return itinerary and, to the east, the peaks of Pizzoc, Visentin and the first Dolomites stand out in the window formed by the aforementioned peaks.
Unlike Bigontina, Le Pellagre is bare, open and lashed by a continuous breeze. We choose the second downhill route on the right which is on the ridge and, thanks to a steep slope sometimes slippery, we arrive at the capital of Sant'Antonio and the nearby Case Botteon. The path resumes between two houses alongside a stream. Here we find a trail marker that helps hikers find their way back to Mount Bala. The path initially looks easy and then changes drastically in the last stretch where we find many brambles and shrubs that make progress difficult. We arrive in the saddle and, instead of continuing to mount Bala, we take the path on the left. Well marked and easy track, with stones well settled in the series of steep bends allow us to reach the third stage of the day: Mount Piai. The summit plateau is very wide and offers us different types of terrain. From the lunar landscape with many scattered boulders, to the presence of maritime pines, up to the real summit at an altitude of 500m where the dense vegetation returns to reign supreme with oaks and chestnuts. The view is 360 degrees: on one side Tarzo and Nogarlo, behind the Visentin ridge, Vittorio Veneto on the other. The descent from the Piai is rapid thanks to the very steep track in the undergrowth. We rejoin the CAI path 1050 and take the detour on 1051b. At first the route starts with an asphalted road up to an isolated house. From here the path becomes more bumpy and on slippery wet gravel. Independently, we cover it at breakneck speed, crossing the so-called Croda Granda, and we soon reach the town of Tarzo.

A short stretch in the inhabited center allows us to reach the locality of Introvigne, where we take the CAI 1051 path for a short stretch, well marked even in the small hamlet. The dotted ridge trail turns out to be a well-marked trail every 50 meters with red dots on rocks and trees. The route takes us to the fourth ridge of the day: Mount Comun. This ridge is barren from the south and allows us to review the entire route taken up to now, from the north you can see Revine with its characteristic lakes. Unfortunately, the thick vegetation on this side allows you to imagine a large part of the landscape. At the top we also find a beautiful tree house complete with a ladder to access it. On the descent path, we do not choose the marked path that deviates decisively to the left and would make us rejoin the path 1051 at the foot of Mount Comun, but we decide to take the "direct route" that will take us a few steps from the town of Nogarolo, saving us some kilometer of road.
The road immediately reveals itself to be difficult and wild. However, there is a very timid trace that maybe some chestnut hunter makes during the first days of autumn. There are many brambles and shrubs and, not with little difficulty, we manage to reach the road at the height of a large drinking trough. From here we see Nogarolo and rejoin the CAI path 1051, passing under an old barn and then on a dirt road for a few hundred meters. At this point the path climbs to the left and, well marked by a signpost-totem, it is possible to take the easy or wild track to the top of Mount Baldo. Even if tired and tried by the continuous ups and downs on the peaks we have just reached, we make the choice that best suits us and our exploratory philosophy: an uncertain route, straight on the ridge on the Baldo ridge!
The last hill reveals itself as far immediately very demanding. In fact, it welcomes us with a climb on soft muddy ground covered by a light carpet of leaves that make everything more unstable and do not allow an adequate grip to our boots. The legs are getting harder and harder and the first thousand meters of positive altitude difference, after months of inactivity for hiking, are definitely felt. The temperature, which has remained below zero throughout the day, forces us not to stop too much so as not to lose the body heat acquired. This last effort seems to enjoy making us hope for a summit that is always close, instead the crest is a continuous up and down with short very steep sections that are certainly not useful. Each clearing we reach after a tiring sprint turns out to be yet another point from which to descend and then rise again. A short refreshment stop is a must to replenish some sugars in the shadow of the highest point of Mount Baldo (this time for the very last climb!). Here the branches of the trees thin out and in the background you begin to glimpse the summit cross! The landscape is finally clear of obstacles, Revine Lago is below us, like Vittorio Veneto on the other side. The hills of the day, together with Mount Altare, frame the Visentin. The articulated tongue of the motorway is lost in the Val Lapisina and the snowy Col Nudo peeps out in the narrowing of our visual vanishing point.
We are satisfied! Mount Baldo was desired but it was worth it!
A short time for the usual photos and then quickly away again on the ridge which in the meantime is repopulated with its shrubs.
We take the first detour towards right that goes down, the CAI path is 1042a. A nice clean path in the middle of the woods was what we needed to recover. Among the branches we see the first houses of the hamlet of San Lorenzo. We cover asphalted stretches of road, take via monte Zebio to avoid a couple of bends and arrive at the fork that leads on one side to Mount Altare and on the other to Posoccon towards the Duomo of Vittorio Veneto. This time we choose the easiest and shortest way to return to the parking lot. The adventure was long and demanding for all the factors that existed. A couple of kilometers on a false plane and we reach the Posoccon, a last passage under the motorway viaduct and we are back in San Fris, shortly after the car.
The ring closes after 18km and over 1350m of altitude difference. A feast of ridges (no less than 5) with a wild and little beaten itinerary. A tiring excursion in some places but really satisfying, which made me discover new places: the Vittorio hills never disappoint!