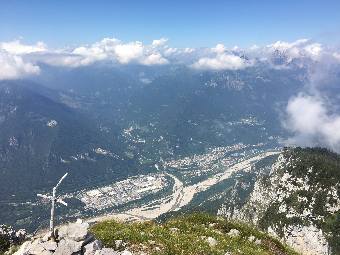 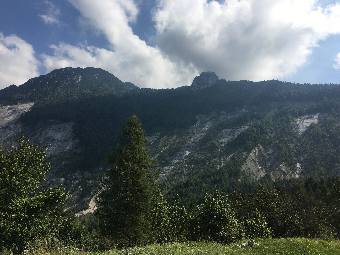 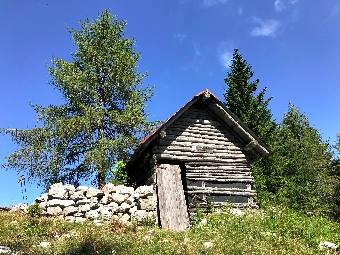 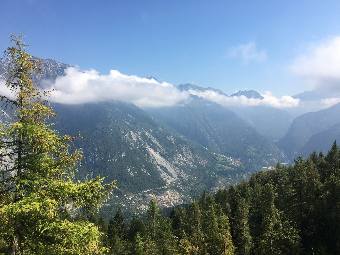 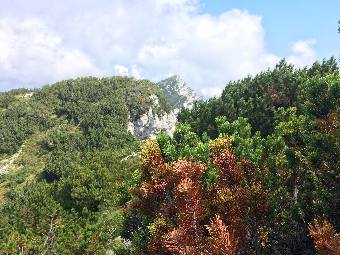 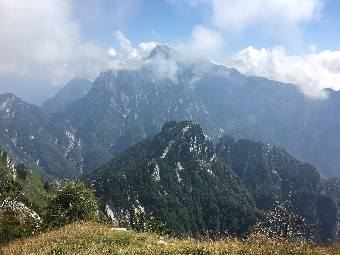 Today's excursion takes place in an unusual place, not as carefree as the others. We are on the Vajont, a few steps from the famous dam which, together with the fateful landslide, caused the disaster in 1963.
Today's goal is precisely the summit of Mount Toc, the mistreated mountain, the cursed peak which for some is was the cause of everything ... Mount Toc has no faults, he has always been there on the lookout for the valley, he had been given a particular name "Toc" which in Veneto means "piece", but in the Friulian language it means something "broken" "," Rotten "," spoiled ". Given these assumptions, the luminaries who chose the location for the dam must at least have a doubt about the tightness of this mountain constantly stressed by the water of the reservoir ... Unfortunately we all know how it ended up due to man and not of this splendid mountain that would need a personal re-evaluation in the naturalistic and panoramic field!
The start of the path is right on the landslide, here now there is a road with a convenient parking that allows you to easily access the start of path 907 towards Casera Vasei. Today's companion in adventure is my friend Tomaso, ready for a new excursion, and proud that he has chosen a Friulian itinerary!
The entire route winds through the beech and fir forest that distinguishes this side of the Toc. The first part of the path is easy, on a well-marked path, until you reach a beautiful opening on the Piave valley with Longarone in the background. From here the track rears up and the most challenging part of the hike begins with steep slopes made even more difficult by slippery ground caused by extreme humidity. The heat we endured was impressed today: with every step the forehead became immediately drenched with sweat.
Every now and then you noticed deviations towards the Toc landslide: the whole route in fact winds on the orographic left of the landslide. . In one of these detours we glimpsed a particular turret which represents one of the cornerstones of the landslide detection points installed already in the summer of 1960 and, in August 1963, precisely these instruments had given alarming data on what would later be check in October of the same year.

The forest offers original glimpses of trees with very strange shapes up to the coast of the Croda Vasei and literally passing under the great ridge of rock it forms. A last succession of small bends to climb, the esplanade of the dairy seems to be at the gates and in fact after a few minutes it can be glimpsed among the trees: here is a small shelter, very spartan and no longer maintained, the Vasei dairy. From here you can see the wooded expanse that leads to the top of the Toc and on the other the small ravine that looks towards Longarone. A short break and off to the summit.
The wood soon gives way to mountain pines which become the only inhabitants of this piece of itinerary from an altitude of 1700m. The path here is no longer marked, you have to orient yourself by observing the pines that are more open and easy to climb.
I recommend that you always stay on the right, ignoring any traces of paths leading to the center of the valley. Some of these routes in fact lead to the Mora peak or end a little further on without the possibility of deviating. For a short while the pines give way to a plateau of grass and spikes that lead to the ridge and then to the forerunner of the Toc: from here you can see the summit right in front ... with a chasm in the middle!
THE path that leads to the actual summit descends a little to the right, always through pines that ensure the path taken well. Here you must in any case have a firm and sure step because there is a considerable jump of rock towards Longarone ...
And here is the summit! A bare summit, made up only of stones with a small “artisan” cross made up of two sticks tied together. The panorama is a complete 360 ​​° over the Longarone valley, you can see the Zoldo, without the mist that has accompanied us all day, you could have seen the Pelmo and the Civetta. Towards the north-east you can see the majestic Duranno and the top of Col Nudo closes the circle.
At the top there is a particular sensation: you can hear nothing, absolute silence even if the busy state road of Longarone passes underneath, wind absent ... just suggestive! It was only right to give a thought to the people who disappeared right at the foot of this peak. We took the return journey along the same route as the first leg which is now a bit drier and easier. When we got to the car, we dried ourselves like after a shower ... the heat never left us a moment's respite, but the adventure, the particularity and the setting of Mount Toc paid off for everything!